First and foremost, I apologise for this post coming out two days after I had planned! The Library was closed on Monday, and naughty me hadn’t got the comics she wanted before the weekend! But I shan’t grovel – let’s just get on with it shall we? 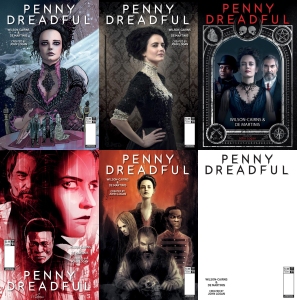 The ‘Cover Gallery’ for #1 of Penny Dreadful in single form. As you can see, Vanessa (Eva Green) is a vital part of the plot – Penny Dreadful, Titan Comics, 2016

Penny Dreadful was a show created for Showtime and Sky by John Logan, a man who had previously written Sweeney Todd: The Demon Barber of Fleet Street and Skyfall. I loved this show when it was on the television, and religiously tuned in each and every week.

However, when it ended it fell completely flat. Like a pancake. Did anyone else see that awful ending? It’s the biggest shame they cancelled it. Especially because, at university, I studied the Victorian period – it’s my favourite time period. My favourite book is actually A Picture of Dorian Gray by Oscar Wilde, so when I saw Dorian was a character in it, I was very excited. His character progression, as with the rest, was amazing right until the end. 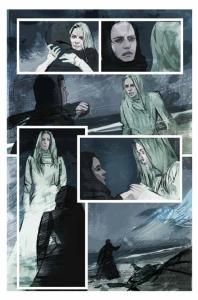 I was a little disappointed I’ll be honest. The comic book just seems like a complete copy from the show. Obviously the characters are going to look alike, but the I felt like they could have done much more with it than they did. The story line for this issue was all about Mina – a minor character, Malcolm’s daughter, from the story of Dracula. In the original story Dracula’s demise, he entraps Mina into his clutches. Much is the true here, but I just couldn’t care less about her story line. Perhaps this is because it was all rounded off in season 1, all those years ago, and so I’ve had closure?

I quite liked the art style, though it might seem to some as a tad dark. But I liked how much like the characters actually looked like their acting counterparts. The darkness fitted the overall mystic of the comic as well as it’s dark nature.

All in all, I suggest it more for people who have yet to see the series and want some preliminary research before the show. Or, I guess, those that just really miss seeing it on our screens.

Have you read Penny Dreadful? Have you seen it? What’s your opinion on either? Are you like me and love Victorian literature? Leave your comment down below!

2 thoughts on “‘There are things within us that need to be unleashed’ – Penny Dreadful, Issue 1”

We may be here a while. Slowly filling up my GBs on #wordpress #stalbanscomiccon #stalbans #comics
Ready to be an @millsandboonuk insider! Super cute bag! My dad and I enjoyed the lovehearts! #millsandbooninsiders #millsandboon #review #blogger
Sorry for no post this week guys! I graduated on Thursday and have been too busy celebrating! See you in a week! 🎓 #Graduation #badlibrarian
Have you seen my #review of #drstrange ? Watched it with @ridgewear Read what I thought at facelesslibrarian.wordpress.com
LET'S GET #swifty New review of Rick and Morty on the blog! PICKLE RICK!
Just finished reviewing #sabrina #chillingadventuresofsabrina See what I thought at 12 noon tomorrow! You're in for a treat!