With volume 7 of Saga, from Image Comics, being released just around the corner, which all of us at the Library are very excited about, I thought I would re-read the first ever volume of it and give you all a brief insight into the world of Landfall, and it’s moon Wreath. Before we get into the review, I want to remind you that Saga is an 18+ comic, and there is sex, swearing, blood and gore below. 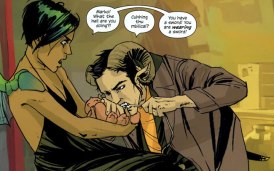 Alana, a Landfallian – all whom have wings and horns (though she can’t actually fly) – and Marko, from Wreath – who’s people all have horns or antlers and can wield magic – get married and have a baby together, which is highly unethical and bad in this world. As a warning, this comic basically just puts you in the middle of the action – as in Alana is literally giving birth to a “mongrel” child – she’s born with horns like her father and wings like her mother. It’s narrated by an older Hazel looking back at her life. This narration carries on for the whole series – which makes for a slightly unreliable narrator, because she’s a child. But it does make for a more interesting story.

There are also TV people. As in people with TV’s for heads. I am not making this up. Next to this paragraph is Prince Robot, a Prince who is a Robot. The Robots are from a dwarf planet, “which doesn’t mean that dwarves live there” which is just some of the great lines narrator-Hazel has.

A big trope in this comic is love. Alana loves Marko and vica versa. Prince Robot has a wife whom he is about to have a child with. Marko and Alana have parents who love them, and despise the other race due to their war. It evokes feeling from the reader by reminding them that they have someone, somewhere, that loves them.

My main issue with the series is that it just feels like we’re going in circles story-line wise, however that is only noticeable in Volumes 5 and 6. Otherwise, it’s an amazing comic, which you should all read! Look out for Volume 7 on our shelves soon!

Have you read Saga? What’s your thoughts? Would you recommend it to anyone? Leave a comment below!

6 thoughts on “‘This is how an idea becomes real’ – Saga”